E of Cistem Failure/Momma Swift is in jail in Norway! 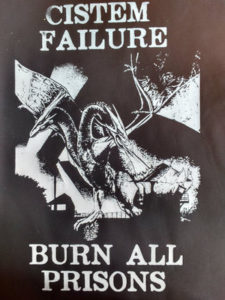 I got word that my friend E, of Momma Swift and Cistem Failure, is in jail in Norway, for allegedly pieing Solveig Horne, a homophobic, transphobic and racist politician from the right-wing Norwegian Progress Party, who had the nerve to march at the Norwegian Pride Parade.

They are currently serving up to 45 days in prison after which they will be deported! More info on this on Cistem Failure’s homepage.

Here’s what Cistem Failure’s other members have written on how to help E:

‘What You Can Do

As they are going to be spending the next month in jail, it would be cool if people could write letters, spread the word about the situation, play our music, do a soliparty, whatever. Another thing that we’re doing is making a thrice weekly (Tuesdays, Thursdays and Fridays at 5pm) radio show called Attack on Democracy which E can actually receive in jail. This is made possible by RadiOrakel, a feminist radio station in Oslo (99.3 FM). So if you have any sounds that you think E would like to hear, send them to cistemfailure@riseup.net and we’ll try to work them into the show.

You can send letters to E to this address here:

If you for some reason are unable to send physical post, you can also email us (cistemfailure@riseup.net) and we’ll print it out and make sure it gets to E.’

Please if you can, send them something, a song, a postcard, an email. Also remember all the other political prisoners around the world and get in touch with your/their local Anarchist Black Cross group, attend prisoner writing evenings, or organise one yourself! None of us are free until all are free!