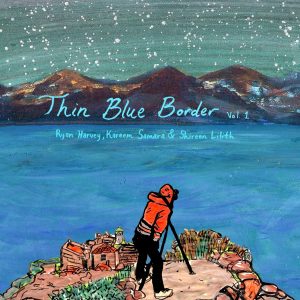 Over the last year, I met up with Ryan Harvey and Kareem Samara, to work on our growing collection of songs. I met up with Ryan last winter to play shows in New York, Boston and the legendary Levon Helm Studios in Woodstock to support Chadwick Stokes on tour. Last month Kareem joined us to play a few shows on the West Coast. We played a radioshow at Mutiny Radio in San Francisco, at The Lost Church supporting the amazing Built for the Sea and at various friend’s houses.

We were out there to promote our new Ep ‘Thin Blue Border’, released on Firebrand Records. You can get it here, here and here.

It’s the first of two EP’s we have made, the second one to be released soon. The songs on this EP deal with the plight of refugees worldwide, teargas companies profiting of social unrest, losing hope and regaining it and the Arab Spring. Oh and Chelsea Manning!

It’s ‘Oud-driven-folk-punk’ at its finest, if I may say so! I’m very curious to hear what you think of it!